Confessions of a Seadbeadaholic part 4

And it's story time again today.

The wire necklaces I made were ok. But that's definately not the end of my bead quest.
I was thinking what if I made my own beads with Fimo Polymer Clay. Then my necklace would be even more special.

So I started experimenting after a quick glance on the internet. Couldn't be that hard I thought. Haha wrong off course. I rolled my beads - nothing wrong at that time. But then they needed to bake in the oven. Ok no problem, I took some tooth picks and pushed them in the clay. But none of the clay beads kept their shape when being pushed on the tooth pick. But I managed to get them shaped again more or less. And in the oven they went.

Great my first badge was ready. After they had cooled down I put on the varnish and waited for a day to let them dry. Finally the next day it was time to get them of the sticks. What did you think happened? The sticks where stuck - couldn't get the beads off. There they went, all in the trash can. 😢

So I decided to buy this book on Bol.com - they even still sell it :) 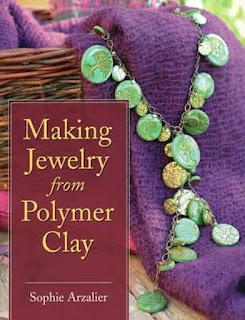 After a bit of training I succeeded into making some reasonably nice beads. Like the ones in this necklace I still have 😊 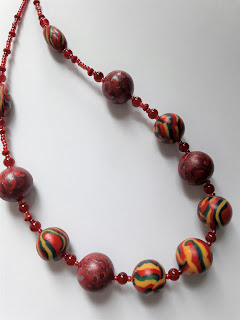 But I must say making those beads is pretty labour intensive. First softening the clay and making shapes or mixes with them. Then rolling out the beads. And the step that I didn't know about before was putting them in the fridge for about 15 minutes to harden the clay again. And I used special bead baking pins to put the beads on. So then they went in the oven for 35 minutes.

After they had cooled down I put on a first coating with varnish. Then I had to wait until next day to put on the second coating. And finally the third day I could take them of the pins and start to use them in my jewelry.

Some people liked and others did not. And I did sell a few on markets. Yes indeed always enough to cover my costs and buy a few new materials. But I wasn't getting rich - no way. My business was still bringing in just enough to buy me some more beading stuff. And I was still happy with that.

Your reaction will be visible after being approved